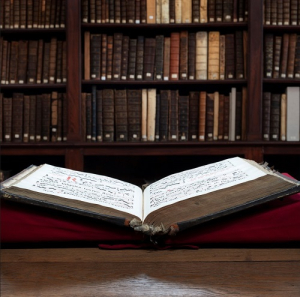 Hundreds of books from the Old Library collection are digitized and available on line. Those that are not digitized are accessible for research purposes, by appointment.

Search the online catalogue
Over 200 manuscripts and printed books have been digitised and can be consulted online, through the Old Library catalogue.
These include courses taught between the 17th and the 19th century in the English Seminary, Scottish College and Irish College in Paris, three manuscripts defending Catholicism against Anglicanism and Protestantism, a selection of printed books on religious controversies in the 17th century are also among the digitised selection, an Irish-English dictionary printed in Paris in 1768, incunabulas...
Have a look at the three beautiful illuminated manuscripts, treasures of the Old Library:
Flemish Psaulter →
This psalter is written in Latin, on vellum and was produced in Bruges circa 1500. Its binding dates from the 19th century. It includes several illuminations and pages featuring richly decorated borders, ornamented with flowers, birds and butterflies...
World chronicle with the descent of the kings of England →
Produced in London, circa 1500, this manuscript in English traces the genealogy of the kings of England, from Adam and Eve to Richard III. It contains illustrations in ink and numerous genealogical trees of the kings of England are depicted, accompanied by 68 medallion portraits, including that of Richard III. The manuscript on vellum retains its original brown calfskin binding.
Book of Hours of Notre-Dame →
This Book of Hours written in Latin, on vellum, was created in Bruges, circa 1470. It features numerous initials, historiated initials and decorated borders. The cover dates from the early eighteenth century and is of English origin.

Books that are not digitised are accessible for research purposes, by appointment. Access to the collections of the Old Library is free of charge.

Application form →
Or by an e-mail to Carole Jacquet: cjacquet@centreculturelirlandais.com